The idea came up during construction work: how to reproduce perfectly identical pieces of wood in series, while gaining in productivity, precision and safety. This is how two carpenters Pierre Giusti and Ilias Zinsstag gave a shape to their idea and created the start-up Epur, based in rural area in the Pyrenees (France). Three years of R&D and two patents later, a first pre-series was marketed at the end of 2018 and 2019. For now, the company has eight employees... [більше ...] 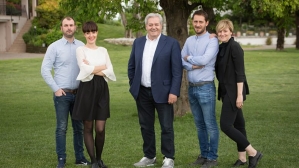 “There have been several stages of our reaction to Covid-19 in the company. First, we did what there was to do…... [більше ...]

Although the company started out as a sawmill, Stefan Aukenthaler decided to shut down the sawing machines a few years ago and specialize in wood processing. "We buy green timber, dry it ourselves and process it into various products such as ...... [більше ...]

Excellent quality is key in the production of window scantlings. EasyScan+ C, a scanner for timber cutting optimization from Weinig Luxscan, allows Centernorma to produce at a consistently high level of quality in their factory ...... [більше ...]

The Board of Directors of Federlegno Arredo Eventi met yesterday in an extraordinary session and, given the continuing health emergency, chose to postpone the edition of the Salone del Mobile .Milano in June, from 16 to 21...... [більше ...]

For 20 years now, Taizhou EVOK Machinery Co., LTD is a machine manufacturer located in the Taizhou Zhejiang province which only one hour away from the Ningbo port. We have earned a very good reputation in the Chinese market as a leading enterprise in the woodworking machinery industry ...... [більше ...]

HARTT is the premier European producer of quality plank paneling at a competitive price. Our parent company Hakwood has decades of experience in creating quality wood products for clients across the globe. Tailoring our product to your wishes is our mission! ...... [більше ...]